Being a photo journalist where the goal of each shot is to capture what’s happening at the moment, it’s tough and tiresome to arrange a formal portraits with so many people that are clueless to your camera. Anyone in my shoes would understand this all too well, the 30 minute session can sometimes feel like an eternity, and requires a lot of patience.

I’ve found that the immediate bridal party, closest friends, and younger people pay the most attention to me as the photographer. They have a clue it’s picture taking time. It’s the older generation and those who can’t understand English that zone out and just stand where they are told to. I’ve decided not to try too hard to get everyone’s attention, because it will never happen. You will never get a perfect shot in a large group photo. The best you can do is take 5 in a row and hope for the best.

There are at least six types of clueless subjects in a group photo, from left to right:

1. Bored subjects are either uninterested in the photo, or are easily distracted by other shiny objects. There are also the fakers, who look at you while you count down, but when you take the actual photo, they look away. This can happen to anyone from a distant relative to the bride and groom’s parents, to even the bride or groom themselves.

2. Blinkers are those who synchronize their blinking to your shutter releases. They blink all 5 photos you’ve taken, but they look fine when you’re looking directly at them.

3. The Lost are those who don’t really know where they are. They are usually the elderly who have been pushed on stage but they are just wondering whether or not they’ve remembered their dentures.

4. Parents always care too much about their new born facing the camera that they themselves end up facing and yelling at the baby in the photograph. Telling a baby to look at the camera is like telling your dog Happy Birthday.

5. The Uncle is usually the least respectful person at the wedding to everyone including the photographer. It’s usually the Uncle who hordes the latest DSLR equipment and tries to take over your job, but that’s another story. The Uncle also has important business calls he must take during a photo session and he will not put down the phone. I usually stare at him until he’s finished with his important business call, it would be rude of me not to wait.

6. Kids are hit or miss. Either they love the camera, or they absolutely hate it. Don’t drag an angry kid into a group photo, because they will most likely make an ugly face on purpose unless you threaten to take away his Nintendo DS. Kids should be the parent’s responsibility. No kids enjoy being shoved onto the stage.

In fact, I think I should take more photos while everyone in the group is not doing what they’re supposed to. It should make more of an interesting story don’t you think? 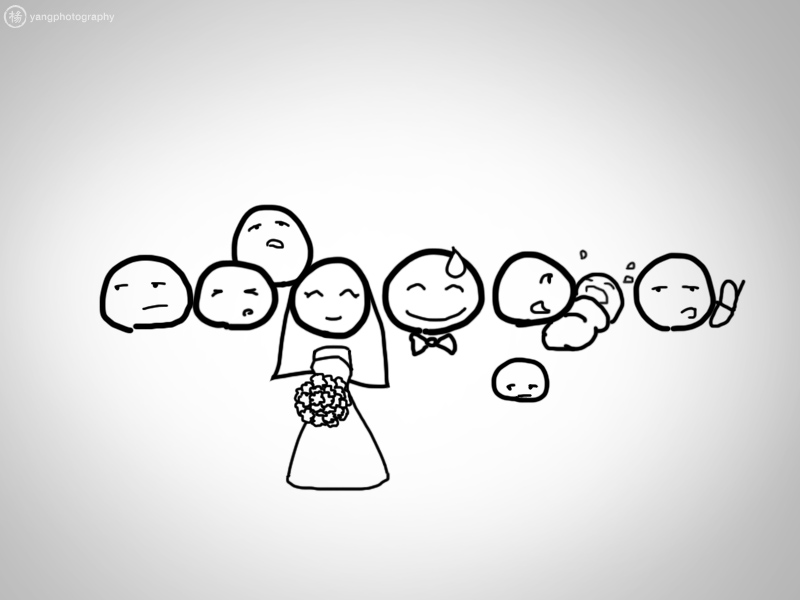